Statement of the Problem

Chloramination of water is performed to produce a more stable disinfectant compared to free chlorine. Chloramine has been shown to reduce the formation of THM and other disinfection by-products by as much as 80%, while reducing certain taste and odor problems. In some parts of the US, especially the Midwest and south, as many as one third to one half of the utilities serving over 50,000 customers currently practice chloramination.

There are three typical strategies for creation of chloramine in potable water. All involve the addition of ammonia and free chlorine in the process:

1. Concurrent addition allows a very short direct contact time for free chlorine and water before reacting with ammonia. This method optimizes use of free chlorine as a primary disinfectant while reducing the formation of THM in the water.

2. Preammoniation, where ammonia is fed upstream from the chlorine addition point, provides the lowest possible THM formation and better taste and odor control, but somewhat less effective disinfection than either concurrent addition or post ammoniation.

3. Post ammoniation provides a substantial free chlorine contact period prior to the addition of ammonia and the formation of chloramine. This achieves maximum disinfection but may also maximize THM formation.

Optimization of chloramine treatment variables requires accurate feed rate control to ensure a consistent CL2 to NH3-N ratio and a desired total chlorine residual in water leaving the treatment plant typically in the range of 2.0 to 4.0 mg/l as Cl2. Control systems used by many utilities are inadequate for accomplishing this objective , because total chlorine analysis alone cannot locate a specific point on the breakpoint curve. Manual feed control and flow pacing strategies may not be adequate for control in the presence of a variable chlorine demand. Downstream chlorine residual monitoring may not adequately define the state of the process, since the same total chlorine residual can be achieved at any of three different locations on the breakpoint curve, each representing a different chlorine species resulting from very different chlorine feed rates.

The ideal control strategy for chloramination is one that can perform an actual direct measurement of free ammonia, monochloramine and total chlorine.

ChemScan Process Analyzers can detect free ammonia at concentrations as low as 0.02 mg/l as N. This analysis will allow a small but measurable residual of free ammonia to be maintained, thus assuring that the process remains at or near the peak of the breakpoint curve. Nitrification problems can be avoided and ammonia or chlorine feed rates can be optimized based on the analysis of free ammonia in the chloraminated water. Free ammonia may also be a desirable parameter for control of a preammoniation process, especially if there is a substantial distance between the point of ammonia addition and the point of chlorine addition.
Monochloramine (NH2Cl) has a strong light absorbance signature in the ultraviolet wavelength range, the intensity of which is proportionate to monochloramine concentration. ChemScan can therefore provide a direct (primary) analysis of monochloramine. An idiometric method is also available for analysis of low concentrations. Monochloramine measurements are typically reported in Cl2 equivalent units.

Apparatus
​
A single ChemScan UV-2150/S Analyzer can detect free ammonia, total ammonia, monochloramine and total chlorine from one or two sample points in the process. 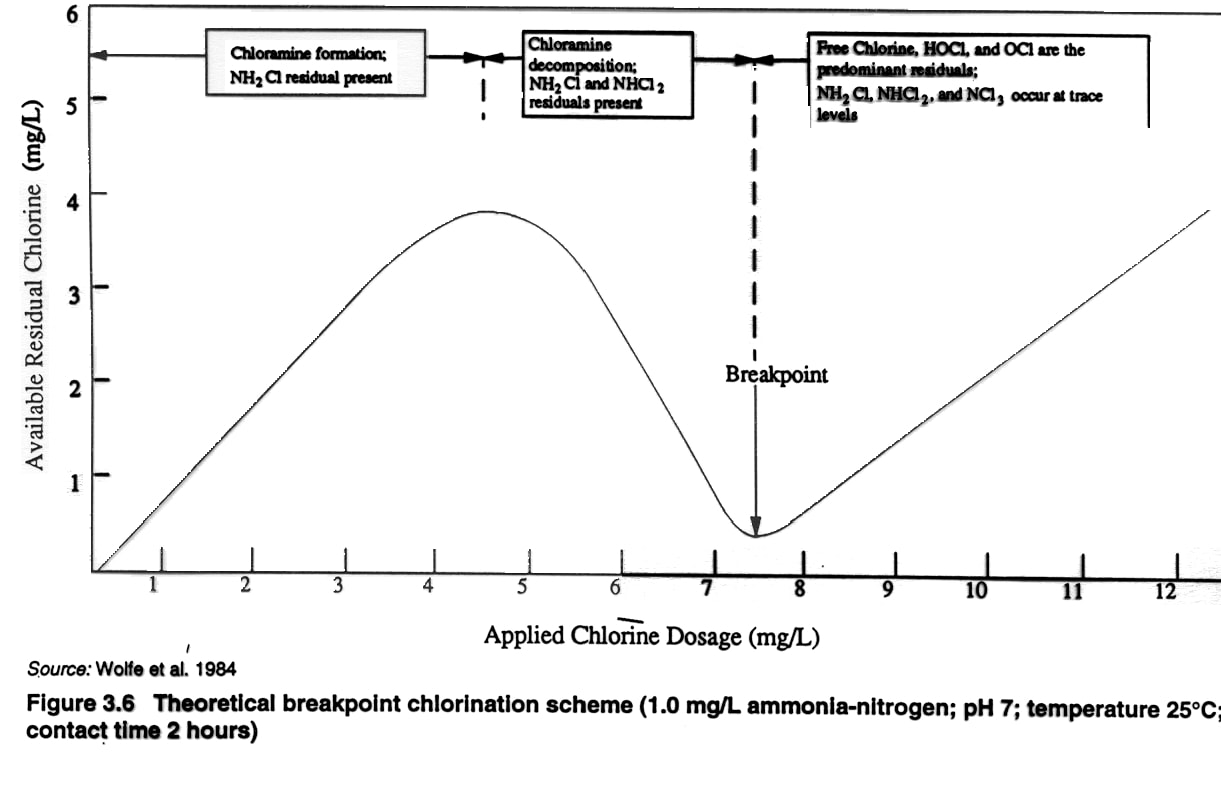