Background
Lack of manpower resources has made it increasingly difficult for U.S. Army installations to maintain corrosion and scale control programs for boilers and cooling towers. Corrosion and scale can result in reduced energy efficiency and premature failure for such equipment. Many corrosion and scale problems can be avoided through the proper pre-treatment of incoming cooling and boiler water and through the addition of certain water treatment chemicals to the recirculated cooling or boiler water. These treatment programs require testing of water samples from specific locations within a cooling or boiler system, at regular intervals, with subsequent adjustments made to the water chemistry based on the test results. As manpower is reduced, the desired frequency for water testing may no longer be possible and the capability and/or expertise needed to make the appropriate water chemistry adjustments may also be lost.

One solution to this problem is a low cost automatic analyzer system capable of measuring several significant process chemistry variables for cooling or boiler systems. Information from the system could be available to guide manual adjustments, alarm out of range conditions, and/or provide inputs for future automatic control systems.

The research conducted under this small business innovative research Phase II project designed, prototyped, and tested an integrated on-line instrument system for the analysis of multiple chemical substances critical to the successful monitoring and operation of U.S. Army cooling and boiler systems using multiple wavelength on-line UV absorbance spectrometry as the detection method. This research followed a successful Phase I project which demonstrated the feasibility of multiple parameter analysis of cooling water and boiler water control parameters. On-Line analysis of molybdate and tolytriozole in cooling water and on-line analysis of phosphate, ammonia and oxygen scavanger (Surgard) was demonstrated during Phase I. (See ASA Publication Number 70).

Analyte methods were developed, evaluated, and tested for the analysis of priority parameters present in typical U.S. Army boiler systems. These analytes include parameters such as phosphate, sulfite, pH, and hardness. The methods tested for determining these priority parameters relied primarily upon the use of secondary absorbance techniques utilizing additives and/or reagents. These methods are similar to well known analytical procedures in which additives and/or reagents create or enhance the absorption spectra for chemical substances of interest. Pattern recognition methods were used with the absorption spectra obtained to enhance or simplify the secondary absorbance methods. Methods for determining lower priority parameters such as polymers, amines, and metals were also evaluated. These methods relied mainly upon the use of primary absorbance, without additives or reagents. (A complete list of parameters evaluated during Phase I and II can be found in Attachment A).

An integrated on-line instrument system was designed, prototyped, and tested to perform the analyses developed. This instrument system includes functionality to acquire a sample, add the reagents needed for analysis, perform the analysis, make results available in several formats, and perform low level maintenance with minimal operator intervention. A sample from a boiler system undergoes temperature and pressure modifications via a modified commercially available conditioning panel. The modifications add a sample filtration step and allow the panel to operate under control of the instrument system. The addition of the reagents is performed in a small volume flow cell with the needed reagents being added using appropriately sized plunger pumps. Absorption spectra are acquired using a special flashlamp, fiber optic cables, and a photodiode array spectrometer. pattern recognition techniques are applied by an internal processor with predicted analyte values being displayed on a small LCD panel, stored internally in a data log, and output to an RS232 serial port. The instrument is also capable of modem communications that allow many operator functions to be performed at a distance. Low level maintenance functions include operator selectable autozeroing interval and automatic cleaning of sample flow paths for the sample preparation subsystem and the analyzer system. Several versions of the instrument for analysis of certain individual parameters or analysis of various combinations of multiple parameters are possible.

A prototype instrument to determine the hardness of feedwater from a water softener system was assembled for field testing. This instrument was composed of a UV-3100 type electronics enclosure with flash lamp, spectrograph and fiber optic connections to a lower enclosure which contains a manifold block, a removable flowcell with in-cell injection capability, a programmable logic controller circuit board. A pressure regulator was placed prior to the manifold block so as to limit the sample line pressure to a maximum of 30 pounds per square inch. The water pressure coming out of the water softener system typically is in the range of 90 to 120 pounds per square inch. The autoclean and autozero functions were available in the system also.

​A typical measurement cycle for this prototype instrument started with a 90 second flush of the sample line through the flowcell, drained to waste. The flow was then stopped and the fluid path from the manifold block to the flowcell was purged with air. This allows for a reasonably constant volume of sample to be in the flowcell for each measurement. A background spectrum is acquired and stored in an internal instrument register. A series of reagent injections are performed to add the reagent to the flowcell contents. Air is bubbled through the flowcell to mix the contents and a short reaction time is allowed. The particular reaction is almost instantaneous so the main use of the reaction time is to allow any air bubbles adhering to the flowcell windows a chance to move out of the light path. A second spectral measurement is made and also stored in an internal instrument register. The two spectra are subsequently subtracted from one another and the resulting difference spectrum passed on to the prediction calculation performed by the instrument. Once obtained, the results are displayed and the flowcell is flushed with sample water to remove the reacted solution from the flowcell. Finally, an air purge is once again activated to purge the fluid passages of the manifold block to the flowcell. The instrument then moves to a waiting state. In this mode, the time remaining until the next measurement cycle begins is displayed, alternating with the last predicted concentration. The entire measurement cycle required approximately three minutes for completion. The measurement cycle time is varied, from a measurement every fifteen minutes to a measurement every hour, during different portions of the field test. The one hour measurement cycle was typical.

This prototype instrument was operated for a period of ninety days without mechanical difficulty. Results obtained during an operating period will be discussed separately below.

Boiler Analyzer
A prototype instrument to perform analysis of boiler water parameters was also assembled for field testing. This instrument is composed of a sample temperature and pressure conditioning system, a small volume solids filter unit, a manifold block, and a removable flowcell with in-cell reagent injection capability. Due to the number of valves that needed to be controlled, a programmable logic controller was used instead of the single board replacement. The flowcell had five reagent ports available for use in injecting up to five different reagents. The programmable logic controller code was written so as to allow any of the five reagent injection pumps to be used as needed in performing an analysis. The analytical methods used with this prototype were the vanadomolybdophosphoric acid method to determine phosphate ion, the Mordant Orange 1/Tropaeolin O pH indicator method to determine pH and the Iron (III) ion/1,10-phenanthroline method for the determination of sulfite ion. The first two methods listed used additions of single reagents while the third method used the addition of two reagents.

A typical measurement cycle began with the activation of the sample conditioner which resulted in the cooling water being turned on, followed by the boiler water flush, which was subsequently followed by the boiler water flowing through the filter device. When flow had begun through the filter device, a sample pump was started on the instrument which removed filtered sample to flush the manifold and flowcell. After a one minute flush time, the manifold to flowcell fluid path was purged with air. A background spectrum was obtained and the phosphate reagent was injected into the flowcell. The contents of the flowcell were mixed with air and a two minute reaction time allowed. After the reaction time had elapsed, a second spectral measurement was made and the two spectra were subtracted from one another. The difference spectrum was then passed to the chemometric algorithm to predict a phosphate concentration. The sample pump was started again and a fresh boiler water sample was used to flush the manifold and flowcell. The general cycle after this flushing was repeated with the mixed pH indicator reagent being added to the flowcell instead of the phosphate reagent. The flushing was repeated a third time with the general cycle being repeated with the sulfite reagents being added. At the end of the measurement cycle, the boiler water sample was turned off, the filter was backwashed with a dilute acid solution followed by a tap water rinse and an air rinse. The cooling water was then turned off and the instrument began timing a wait period until the next measurement cycle.

A single measurement cycle required approximately fifteen minutes for completion. The cycle time between measurements was varied from thirty minutes to four hours. In addition to the instrument and its peripheral devices, a telephone modem was included to allow for long distance communication with the instrument. The data log and the last reading predictions were available for viewing by using a computer to access the modem.

The hardware components developed under the contract operated successfully in a variety of environments with no difficulties. The work to minimize on-site calibration of an instrument was found to greatly decrease the amount of time needed by a service technician to perform the installation of an instrument. The additional software tools also allow on-site personnel to correct certain types of instrument misfunctions without the need to send a factory technician.

The analytical methods developed under the contract that were subjected to field testing performed reliably with no on-site calibration required. Small adjustments were required by several methods to allow the measured parameter to match the results of the manual tests that were performed by site personnel. The exception to this general statement is the sulfite method which needs additional development work. 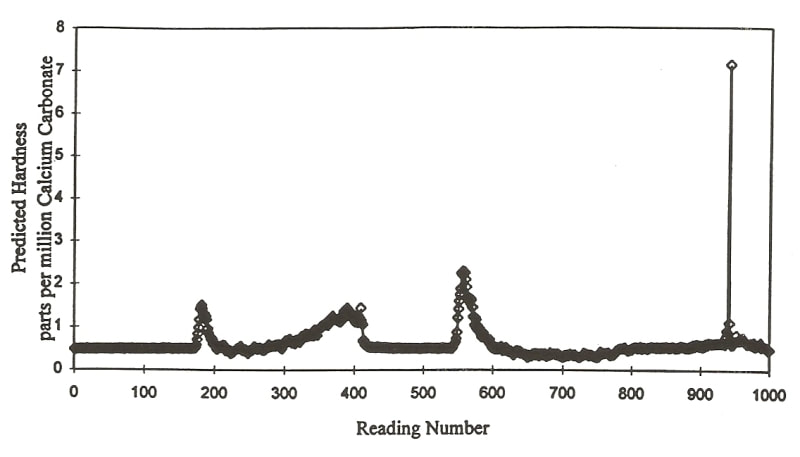 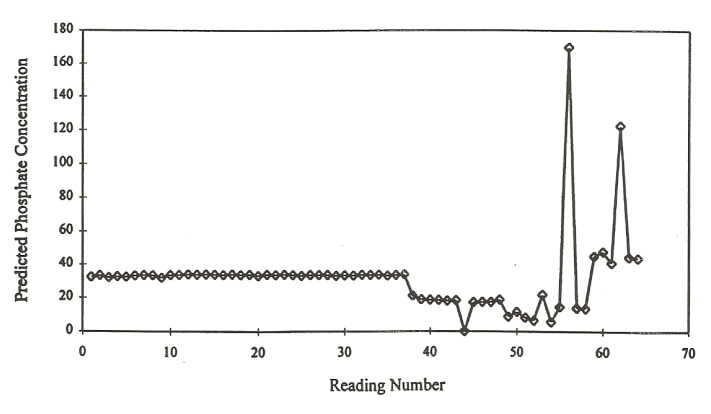 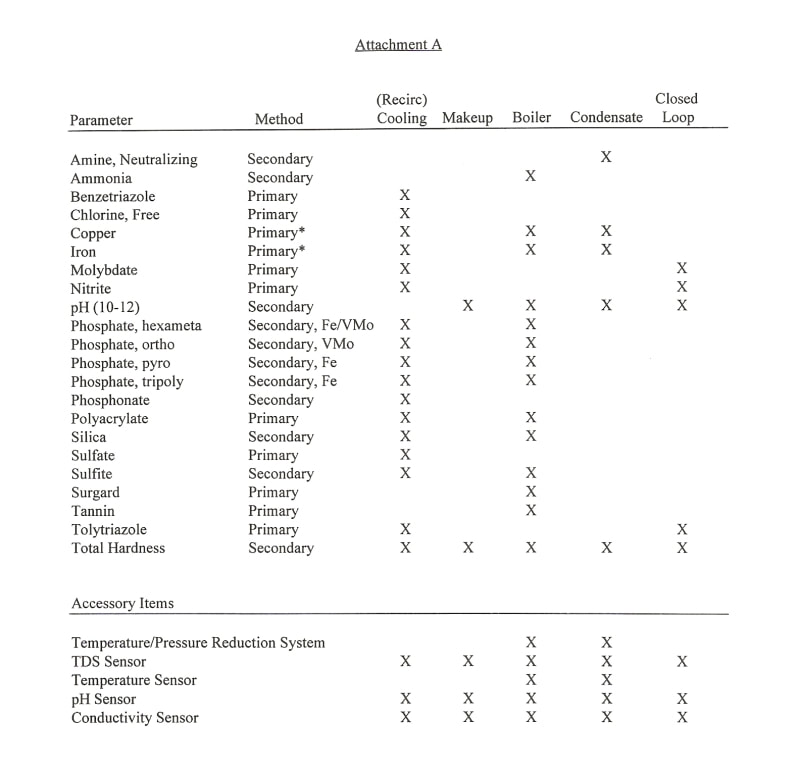